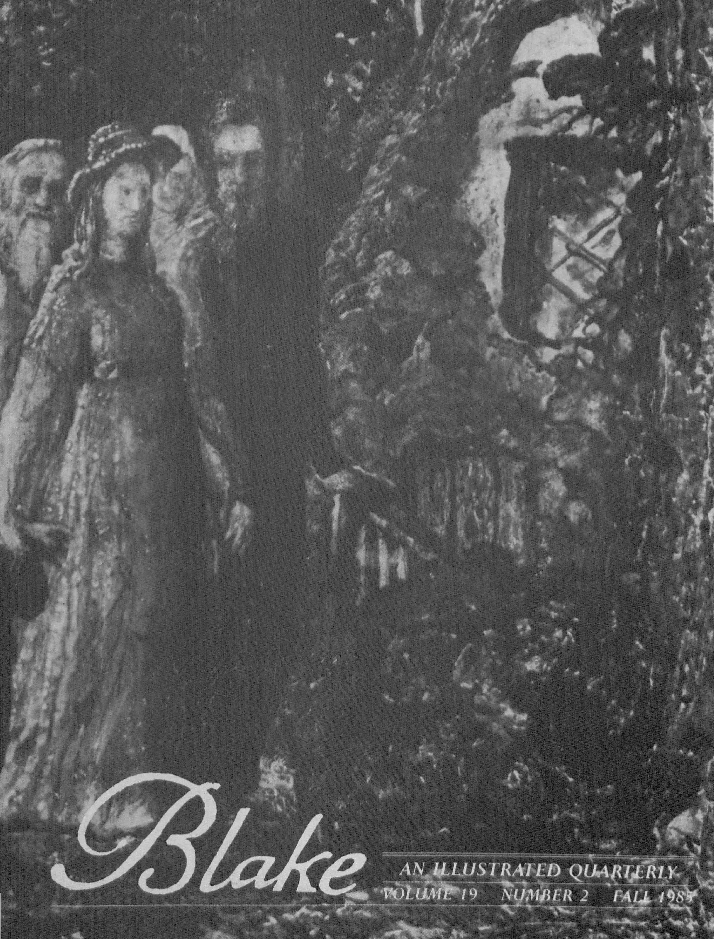 G.E. BENTLEY, JR., of the University of Toronto has just completed Blake Records Supplement and Thomas Macklin: Picture-Publisher and Patron.

DAVID BINDMAN, Reader in History of Art, Westfield College, University of London, has written books on Hogarth, Blake, and English sculptors. His The Thames & Hudson Encyclopedia of British Art was published this year.

V.A. DE LUCA is Professor of English at the University of Toronto. His most recent essay on Blake, “A Wall of Words: The Sublime as Text,” appears in the collection Unnam’d Forms: Blake and Textuality, edited by Nelson Hilton and Thomas Vogler.

KARL KROEBER, Professor of English and Comparative Literature at Columbia University, recently published Wordsworth: An Annotated Bibliography: in his forthcoming British Romantic Art, Blake’s work is one of the principal foci.

JENIJOY LA BELLE, Associate Professor of Literature at the California Institute of Technology, is currently working with a previously unknown group of letters containing references to Blake.

RAYMOND LISTER is a Fellow of Wolfson College, Cambridge, and a Syndic of the Fitzwilliam Museum. From 1976-80 he was Chairman of the Board of Governors of the Federation of British Artists and from 1970-80 President of the Royal Society of Miniature Painters, Sculptors, and Gravers. He has written several books on Blake and his followers.

JOSEPHINE MCQUAIL received her B.A. and M.A. degrees from the University of Virginia, Charlottesville, where she took a course from Leopold Damrosch, the memory of which still inspires her. She is currently working towards a doctorate in English literature at the University of California, Berkeley.

KAREN MULHALLEN, Professor of English at Ryerson Polytechnical Institute, Toronto, is the editor and begin page 55 | ↑ back to top publisher of Descant, a literary quarterly, and Arts Editor of The Canadian Forum magazine, a journal of politics and the arts. She is now completing a study of Blake’s Night Thoughts illustrations.

JOSEPH VISCOMI, Assistant Professor of English at the University of North Carolina, Chapel Hill, has written on Blake and other eighteenth-century printmakers. He is the author of The Art of William Blake’s Illuminated Prints, and has edited for videotape his stage adaptation of An Island in the Moon, with original music composed by MARGARET LAFRANCE, a flutist teaching and performing in Ithaca, New York.

Blake/An Illustrated Quarterly is published under the sponsorship of the Department of English, University of New Mexico.

Subscriptions are $18 for institutions, $15 for individuals. All subscriptions are by the volume (1 year, 4 issues) and begin with the summer issue. Subscription payments received after the summer issue will be applied to the 4 issues of the current volume. Foreign addresses (except Canada and Mexico) require a $3 per volume postal surcharge for surface mail, a $10 per volume surcharge for air mail delivery. U.S. currency or international money order necessary. Make checks payable to Blake/An Illustrated Quarterly. Address all subscription orders and related communications to Robin Tawney, Blake, Department of English, University of New Mexico, Albuquerque, NM 87131, USA.

Many back issues are available at a reduced price. Address Robin Tawney for a list of issues and prices.