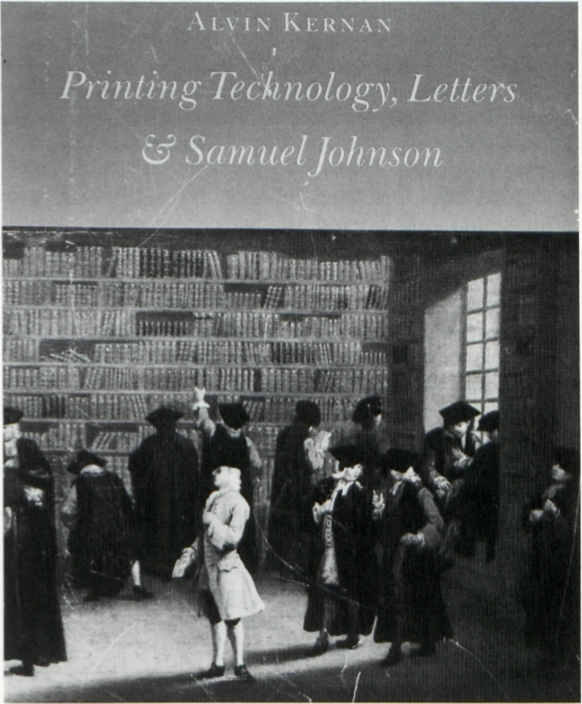 Though it mentions Blake only twice in passing, this stimulating book brings a welcome base to our evolving consideration of the most distinguishing aspect of Blake’s project, his self-published “Illuminated Printing.” “Even Milton and Shakespeare could not publish begin page 166 | ↑ back to top their own works,” Blake notes in the 1793 prospectus; “This difficulty has been obviated by the Author of the following productions now presented to the Public; who has invented a method of Printing . . . which combines the Painter and the Poet.” Kernan’s book helps us place this radical innovation in a social context, making the most significant difference between Blake’s work and the rest of literature again its most meaningful difference.

Caxton, the Authorized Version, and the first Folio notwithstanding, it was during the eighteenth century that England became a print society, and the consequences of “the interiorization of technology” (Marshall McLuhan’s phrase) were profound and pervasive, altering the nature of consciousness itself. Indeed, only the breaking down of print-based letters in our emerging postindustrial and electronic culture forces upon us the necessary distance and concern to formulate our earlier transformation.

For Kernan, Samuel Johnson exemplifies the new professional role offered the writer by print culture. Usually seen as “a Roland, the last defender of the old neoclassic values,” here Johnson, especially in Boswell’s mythic image of him, appears “a bearer of the new, an epic figure of the Aeneas type in uneasy transition between two cultural worlds” (22) and stands as the founding instance of “the romantic cult of authorial personality” (149). Johnson’s notorious authoritativeness, besides masking his own at times despairing nihilism, “matched exactly the needs created by print technology and by a medium that provided an increasingly baffling surplus of information, much of it contradictory, all of it confusing and unsettling in its multiplicity and novelty” (150). As Kernan points out elsewhere, “Libraries of the time seldom exceeded 50,000 volumes . . . but this was a bibliographic magnitude sufficient to change the society’s conception of knowledge” (242).

At the beginning of the century, anxiety over the changing conception of knowledge is expressed in the conflict of the Ancients against the Moderns, as in Swift’s Battle of the Books. This anxiety modulates into satire on the modern invention of printing and its modern creations, the hacks and dunces, most evidently in A Tale of a Tub and the Dunciad. For (rather, In) all their typographic exuberance both works reflect a thoroughgoing condemnation of the changes being wrought by the brave new world of print, “in Pope’s view the end of polite letters and ultimately of civilization” (9). But for Kernan, “The most moving and instructive records of the change in letters appear, however, in the lives of those writers like Defoe, Savage, Goldsmith, Smart, and Samuel Johnson who actually lived in the world of Grub Street and experienced without protection the full impact of print on the life of writing” (17). Here Kernan evokes a gallery of troubled souls not exactly (like Blake’s Cowper’s Blake) “mad as a refuge from unbelief,” but caught between “the breakdown of traditional poetic roles” and their own efforts “to make themselves something other than laborers in the book factory” (85). Smart’s bookseller, we are reminded, bound the poet to a 99-year contract. Kernan concludes that “the extreme intensity and imagination these poets [poets including also Chatterton, Macpherson, and Cowper] expended to make an acceptable, a liveable, poetic role for themselves, however mad the actions may now seem, serve to suggest, startingly, the degree to which human feelings and existential values are involved in a radical change in the social arrangements of letters” (87). Only Johnson, in this view, chose “to be openly a modern” (88) and to enjoy (evidently despite his frequent despair) the satisfactions of being “a proud and efficient professional” (97).

Johnson’s mastery of (and by) print logic appears in his most typographically ambitious production, the Dictionary, which embodies, materially and conceptually, that logic’s characteristics of “multiplicity, systematization, and fixity” (54). Marking an interesting complication in the argument, Kernan observes that the “popular success and extraordinary usefulness of the Dictionary guaranteed the general acceptance in the long run of its central idea that the great writers and their books determine the language” (199). The establishing of “the great writers,” still more evident in Johnson’s last major (and, as usual, commissioned) project, The Lives of the Poets, can be seen as a response in the realm of imagination to this “new, and during the eighteenth century increasingly normal, condition in which author and reader were isolated from one another [and which] was the primary form the first literary crisis took in the world of letters” (221). (This crisis, discussed in the chapter on “Reading and Readers: The Literary Crisis of the Eighteenth Century” is not the one we associate with the mechanics of reading but concerns “The Writer’s Audience in a Print Culture.”)

This fundamental literary crisis opens “romanticism’s continuing problems with authenticity in the modern print world” (90). Correlating with the decay of civic humanism mapped in John Barrell’s recent book (The Political Theory of Painting from Reynolds to Hazlitt, Yale 1986) and the onset of “literary loneliness in mid-eighteenth-century England” seen by John Sitter (in his book with that title, Cornell 1982), Kernan suggests that “As identity based on social existence waned, it was replaced with a belief—probably encouraged by reading books in privacy—that authentic being could be realized only in intense self-awareness and consciousness” (125). Hence romanticism and the accompanying creation of “literature” (and, eventually, literature departments) out of “letters.” The following begin page 167 | ↑ back to top memorable sentences on this development can stand for the vision and cogency to be found throughout Kernan’s book:

The rejection of capitalist society and its rationalistic thought in favor of older idealized felt values of community and imagination ironically provided romantic literature with a firm, though not a centrally important, place in modern culture as the defender in art of certain “higher” values and more humane ways of feeling. But this strategy, insofar as it was ever planned, had its costs, for it involved literature in a fundamental social contradiction by placing its aesthetics and metaphysics in direct opposition to its actual social circumstances. This rub has been felt heavily and consistently in ways that are revealed by the persistently difficult relationship of romantic literature and print technology. (294)

And hence, at last, one is tempted to add (though Kernan does not), Jacques Derrida and his conception of “grammatology,” “a general science of writing” born “during a certain period of the world’s history (beginning around the eighteenth century)” (Of Grammatology, trans. G. C. Spivak, Baltimore: Johns Hopkins UP, 1976, 27).

In this context of “the social construction of letters in the age of print” (314), Blake’s practice carries a deep burden. Blake literally took more care with and of writing than any other author, and this care—the concept extends to Heideggerian sorge—is his authentification, together with the many playful games he shares on the conventions of “print logic.” Enacted on the etched, illuminated, and self-published page and in the unresting attempt to co-ordinate the infinity of minute particulars, this care seems to me what Blake has most to teach. It is somewhat more than being “a proud and efficient professional.” The quality of “authenticity” is, no doubt, itself relative to a culture in turn determined by changing modes of technology / production; but what humanist author other than Blake will so profit by the diffusion of video disk and high resolution monitor?

No book is perfect. The howler on page 185 which has Johnson’s mother dying “while he was working on the Dictionary” is a disquieting reminder of the slips awaiting one “who has not written on Johnson before” (xi), and especially in a book so concerned with printing technology one is struck by a page like 129, where over half of the thirty-four lines end in hyphens. But this is trifling. Alvin Kernan has written an engaging and provocative book for anyone concerned with print and letters in eighteenth-century England; with printing, bookselling, readers, and writers in eighteenth-century London; with making the writer’s role in a print culture; with creating an aura for literary texts in print culture; with the place and purpose of letters in print society; with the social construction of romantic literature (introduction and chapters 2, 3, 5, 7, 8) and a host of collateral topics—a book, in short, for almost every reader of this journal.