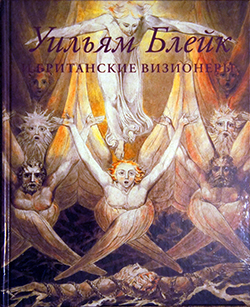 And if the exhibition shares a little bit of the madness and radicalism of its artist, its goal is achieved: Blake has raised many pressing questions about man’s place in the world—it seems like answers might be sought forever.
V. D'yakonov, Kommersant-Vlast' [Businessman-Power]

A surprising and unprecedented event happened in Moscow at the end of 2011, when an exhibition of paintings by William Blake opened. Such a show of Blake’s works is a great rarity, because there are no Blake paintings in Russian art collections. The exhibition presented about 150 works by Blake and some of his “British visionary” counterparts from the collections of the eight largest museums in the UK. According to the web portal Gazeta.ru, “Only a few Britons have been able to see so much of Blake’s fine legacy.”

For Russia, the exhibition was very significant as a literary event because, in general, for the Russian consciousness Blake remains a lyric poet whose short works are known in some excellent translations, but both his epics and his paintings are not well known. In the pre-Soviet era Blake was identified in Russian criticism as a forerunner of the symbolists. In Soviet times, along with Byron, he was considered a “revolutionary” romantic. But the years 2010-12 became a real renaissance for Blake in Russia, when he began to be perceived as both brilliant and eccentric.

On the threshold of the exhibition several books on Blake appeared in Russian, including a new collection of translations of Songs of Innocence and of Experience—a beautiful and expensive book, with original translations of the poems and color facsimiles of Blake’s prints [see review]. In early 2011 a special issue of Inostrannaya Literatura [Foreign Literature] came out, dedicated to the legacy of Blake. In early 2012 my monograph in Russian on the shorter prophecies of Blake appeared, containing a narrative analysis of his poems and tracing the perception of his work in twentieth-century culture. Since the exhibition there has been a special Blake issue of the journal [Language. Literature. Culture.] (2013).

The price of admission to the exhibition was very modest, just 300 rubles (about $10). When I arrived at half past ten in the morning there was no queue, but by the evening it stretched the length of two blocks. The museum was also selling a lavish catalogue of the exhibition, printed by Krasnaya ploshchad' [Red Square], at 800 rubles (about $25). Blake’s work has never been published in Russia in such high printing quality. It is a pity that this catalogue had so little promotion.

In the galleries Blake’s paintings (together with works by Rossetti, Palmer, Beardsley, Bacon, and others) were presented side by side with works from the permanent exhibitions of the Pushkin Museum—replicas of ancient, medieval, and Renaissance sculptures. At the same time the museum was hosting a show of works by a visionary of a very different kind, Caravaggio, whose paintings were astonishingly lit in the darkness. Blake’s paintings were hanging on maroon and gray backgrounds in the hallways, where high columns support the ceiling. In this environment Blake appeared to be a grand and austere classical artist, and his connection with the highest literary tradition was confirmed by the illustrations to Dante and Milton.

In the hall of the museum the organizers projected films about Caravaggio and Blake, and it was possible to rent an audio guide for a walk through the hallways. The exhibition halls, where they put the works of Blake, were decorated with greatly enlarged images of prints from Songs of Innocence and of Experience. Unfortunately, I missed the musical evenings, masterclasses, and lectures attached to the exhibition.

What can I say about the exhibition itself? For me, it was Blake, with all his complexity and straightforwardness, intricate lines and symbolism. It was him. Only later did I catch myself thinking that here were those very pieces of paper, wood, and copper he touched two hundred years ago. All I could do was look and try to grasp the message that, I now saw for the first time, was so obviously bursting out of the two-dimensional flatness of the works before me. The Deville lifecast of Blake’s head seemed to me to be a magical artifact, one that could not be touched, even photographed. The stern face, big eyes, pursed lips, and frowning forehead looked as if a man, closing his eyelids, went into fearless and detached thinking about the winepress of wrath, about Judgment Day and the roar of an angry Rintrah. It was the face of an Old Testament prophet. This cast made me believe in the reality of Blake’s existence, as if it embodied his creativity, tying London and the beginning of the nineteenth century to the present place and date. As reported in Nezavisimaya Gazeta, “One of the most successful exhibits accompanying Blake’s visions of his restless heroes is the plaster head made in 1823 by James Deville, where his closed eyes, that a plaster cast of course requires, emphasize the metaphor of the visionary eye.” My attention was also drawn by the statuette named Newton, by Eduardo Paolozzi, who was inspired by Blake’s color prints of the subject.

There were quite a few people at the show, especially neatly dressed old women, students in groups, and middle-aged men and women. The audience apparently included those who came specifically for this exhibition and those who did not know anything about Blake before. I was very interested: what did they see in his paintings, being familiar with his works only by hearsay? What about those who saw these paintings for the first time in their lives?

I found some answers to my questions in the response book, filled with remarkable and candid comments. Here are the most vivid excerpts, in the order that the lines were recorded:

Creator
Guardian manifested in you
Rain poured down grace
Moved into your brain
And poured the grandeur of creation
(Dedicated to William Blake, Tatiana Logunova, Kiev)

Perhaps, it is the right time today to share W. Blake’s point of perception, as the present world enters, apparently, in the most tragic phase of its existence. (Unsigned)

I really did not like Blake. But thanks for the exhibition. (Korea)

The exhibition left me with a painful impression. It was evident that this man was a master of the letter, but the impression communicated to the audience was a kind of insanity. The soul can relax, warm up only at the Caravaggio exhibition … But here? Some worms, no good for the soul. (Isayeva Ye.Yu., teacher, age 54)

… boring monotonous schizophrenic. It would be better to ship more Caravaggio than this abnormal old man, God rest his soul. (Yasha)

Thanks to the art of W. Blake, immediately, directly from today, I will start my reading of Bible stories. This was a trial for some unprepared visitors and tortured my conscience …. (Unsigned)

For many years, I dreamt of seeing an exhibition of Blake’s legacy. The atmosphere—something between the divine and dreadful. (Unsigned)

There were plenty of opinions, many greatly contrasting. Some spoke of Blake’s total incomprehensibility, while others advised the organizers not to prompt viewers to the idea of romantic madness, so deceptively simple. However, in Blake’s own time, nobody would have stood in line for his show: he was simply not well known and generally the public didn’t need him. As written on the Gazeta.ru web site, “for the average art lover getting a deep sense of Blake’s stories is still entering a dark forest. There is just a little difference between us and his contemporaries, except that the overall appraisal has changed from negative to positive.”

And yet, the queue half a kilometer long standing in front of the museum in the late afternoon showed that Blake may have established himself in Russia. His works have had a deep effect on some in the audience, and the press reviews testify to both the profound indifference and the bright impression made by the works of Blake in Russia. 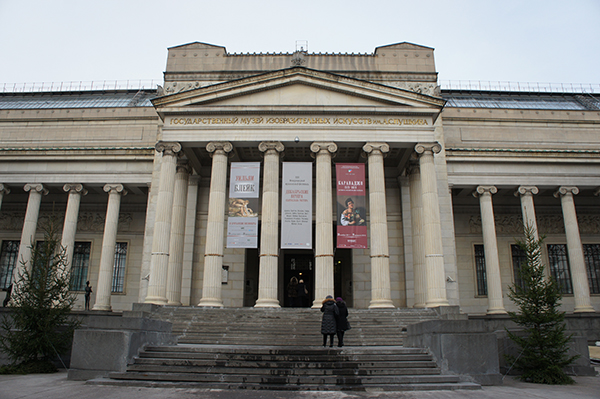 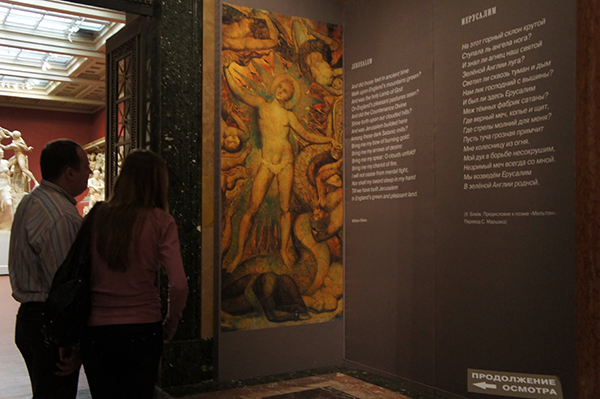 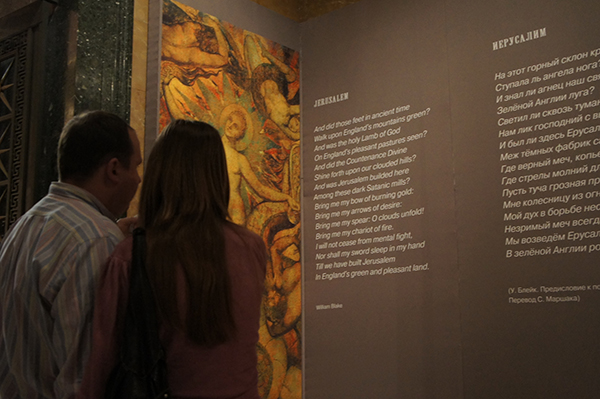 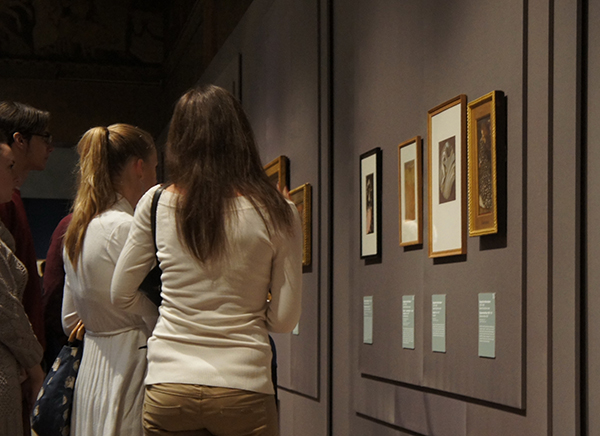 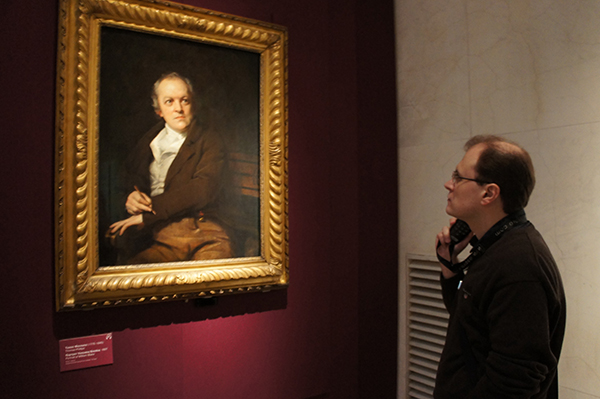 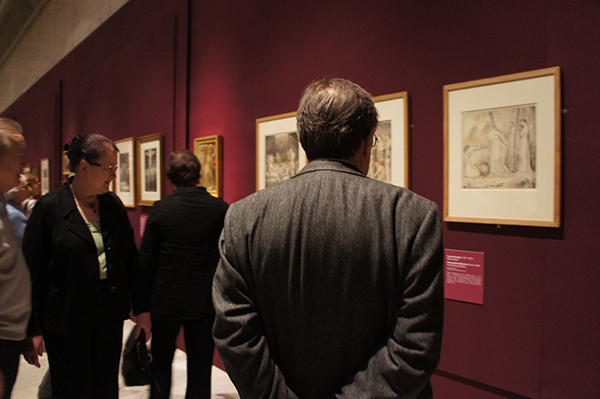 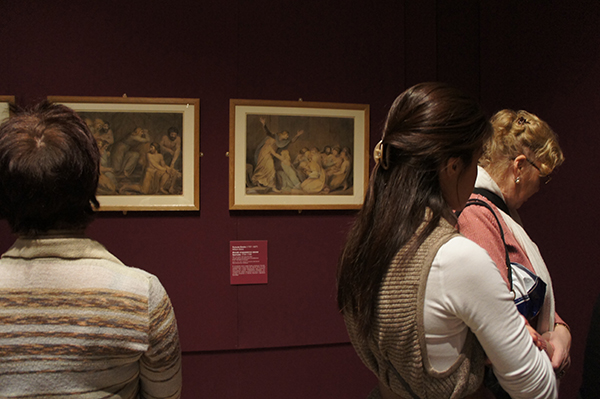