Reviewed by Karl Kroeber*↤ Karl Kroeber, Chairman of the Department of English and Comparative Literature, Columbia University, is author of numerous studies of Romantic literature.

No brief review can do justice to Professor Wagenknecht’s minutely particularized interpretations. It is difficult even to place his readings in any main line of recent Blakean criticism, for his effort to depict Blake as a “pastoral” poet depends almost entirely on a study of Renaissance pastoral, The Landscape of the Mind. There the pastoral poet is defined as one who presents “a fiction imitating an ideal difficult to credit in terms of the imagery which supports the fiction,” and the idea of pastoral as that “this-worldliness and otherworldliness can be reconciled, and that a truly cultivated man, whatever his intimations of divinity, may find a natural human voice.” Despite the somewhat unpromising nature of these quotations, Wagenknecht makes but a single reference to Empson and does not use his ideas, and completely ignores John Holloway’s discussion of the psychologizing of pastoral in Songs of Innocence, an unfortunate omission. Wagenknecht’s commitment is to abstract critical constructs. In Blake’s Night literary history is at best discontinuous: “even in minute particulars there is nothing fanciful in the comparison between Blake’s Songs and The Shepheardes Calendar.” Nothing fanciful, to be sure, but ignoring the two hundred years which separate them may not be the most adroit fashion for developing the significance of such a comparison.

Pivotal for Wagenknecht is his interpretation of “Night,” proving, he believes, “that the themes appropriate to [Blake’s] pastorals are central to his imaginative and intellectual concerns . . . we may expect to find an important pastoral element in his mature work. This is in fact so much the case that we can read right through Blake’s career regarding him distinctly as pastoral or as epic poet.” Blake, in other words, is to be understood as following the celebrated Renaissance/Virgilian pattern of poetic development from pastoral to epic. Thel is interpreted to elucidate this pattern, yielding the insight that “we cannot conceive of avoiding Experience without falling into it; therefore the language by means of which we conceive Innocence is dependent upon Experience and tends to reinforce it. This means that whatever else the picture of Thel’s world is like, it is not unreal.” This is one of the more interesting suggestions in the book, and from it flows Wagenknecht’s final statement of the link between Blake’s early and late work, or, rather, their essential identity: “the interposition of the Covering Cherub, of the darkness of Generation, between Albion and Jesus—and more particularly the joyous acceptance of this sacrifice by the Divine Imagination in Los—is Blake’s final version 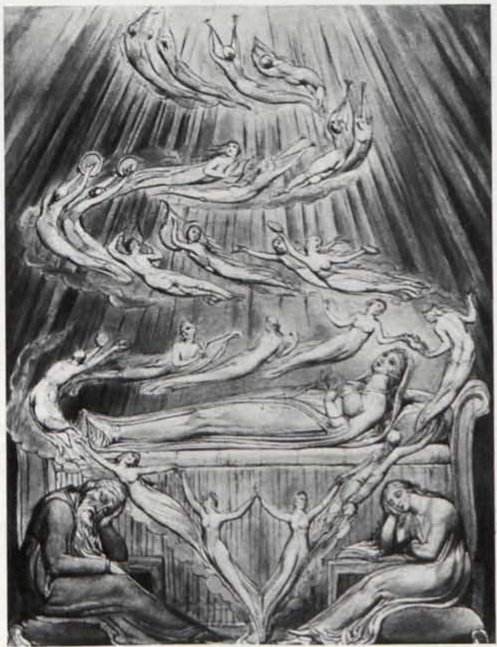 of the idea of pastoral. The complexity of that idea—whereby the human imagination must simultaneously apprehend reality as fallen and as capable of transcendence—is very great in the last pages of Jerusalem, but there is no difference in kind from the many analogous realizations of the idea in pages of Blake which we have already seen.”

I should think few readers would want to quarrel with Wagenknecht’s fundamental idea, but some may feel discomfort at his mode of presentation. Unity can be perceived and demonstrated in Blake’s poetry without confining it within the limits of a rigid, statically conceived pattern of Renaissance art. Closer attention to the processes by which traditions, genres, and modes of literary sensibility changed between the later sixteenth and the later eighteenth centuries would have enriched and strengthened the power of Wagenknecht’s criticism. The hermetic spirit of Blake’s Night makes it seem more like a work of ten or fifteen years ago than a contemporary piece of Blake criticism, but, by the same token, the dated quality of the book indicates its freedom from the pernicious fads of 1970s Blake scholarship.