Reviewed by Jean H. Hagstrum*↤ Jean H. Hagstrum is Professor of English at Northwestern University and author of William Blake, Poet and Painter, among many other publications on Blake.

Lord Kenneth Clark, an authority on landscape, the nude, and the Gothic revival, turns his trained and widely appreciated eye to late eighteenth-century and nineteenth-century art in a book that has been transformed from a television film. That film will undoubtedly be shown on American television, though it may not reach the wide popular appeal of the more comprehensive series entitled Civilisation. Raymond Lister, a painter, illuminator, miniaturist, designer of architectural metal work, is also an author of books and articles on technical subjects, on Palmer, on Victorian narrative painting, including an untechnical, fresh, and informative book on the career and work of Blake—the comment of one craftsman on another. When authors of such special qualifications turn their attention to Blake, readers of this journal will wish to pay attention.

In the Glasgow lecture, which, with a few revisions appears as Chapter 6 in the book, Clark asks bluntly (no pun originally intended, but Sir Kenneth does acknowledge his indebtedness to Sir Anthony in the matter of sources), “How good an artist was Blake?” He partly answers his own question by including him among thirteen artists, four (including Fuseli) English, the rest Continental, ranging from David to Rodin, an honor of place not often accorded Blake by art historians. Yet Clark’s answer is not one of simple praise, for he obviously has mixed feelings. He admires the Dante illustrations enormously, sees exceptional “classical” propriety in the Job, speaks well of illustrations to the prophetic books, especially Urizen. But he seems not attracted by the Songs of Innocence, and he finds many of the water colors weak. He dislikes the Gray illustrations and the Milton illustrations, particularly the ones for Comus, and feels that Blake responded feebly to the New Testament. Since he regards Blake’s thought as a muddle, we cannot expect him to see energy flowing from the pen to the pencil, and he believes in fact that the Dante illustrations are excellent because Blake came in contact with a mind greater and better organized than his own.

Quite apart from matters of personal taste, one is disposed to debate several of Clark’s interpretations. There is space to mention only a few. Clark believes Urizen is the primal economic planner, a Karl Marx drowning in the waters of dialectical materialism. We must grant that Blake would have found an enemy in any tyranny of the left or the right; but in our culture his anti-Man would probably be hypocritical capitalism, a predatory system that cloaks itself in pious or humanitarian wraps. Expectedly, Clark finds the visual primary. The evidence does not always bear him out: Innocence became verbal art before it became visual; and the interpretation of Nebuchadnezzar, whom Clark believes was a recollected werewolf design long before he was attached to a biblical figure, ignores the fact that Blake knew his Bible well from his earliest years and that Nebuchadnezzar as described in the words of the King James version might well have antedated influences from German woodcuts. The Songs of Innocence can scarcely be called rococo; and Clark would see them more clearly and appreciate them more deeply if he considered them against a background of emblem and book illustration, not only against a background of Hellenistic art, Raphael’s Loggie designs, and medieval illumination, though these latter two do play a role in shaping Blake’s imagination as an illuminator of his own songs.

Still, Clark is lively and stimulating, and we must be grateful to him for bringing much powerful Blake to a wide audience. And as a scholar he has thrown out some lines that we may wish to start winding into a ball. The Swedish artist Sergel, who is given one illustration here (and also some in Gert Schiff’s Fuseli); the Bolognese Mannerist Pellegrino Tibaldi, who, according to Clark, was known to Blake through a book of engravings published in 1756 and who according to Thieme und Becker has a sheaf of drawings in the British Museum; and the German, Philip Otto Runge, who Clark says was doing much the same thing Blake was in the Songs—these artists will bear looking into.

Blake appears in Lister’s book in many quotations, some long, a few apposite; and in nine illustrations, all but one very well known and frequently reproduced. The one exception to the familiarity of the Blakes is the reproduction on Plate 26 of Blake’s miniature of Cowper’s relation, the Rev. John Johnson (Johnny Johnson of Norfolk). Although also reproduced by Bentley in Blake Records, the work is not widely known, and Lister is right in finding in the church steeple a personal and prophetic touch since it is unlike any of the churches which the rector served. He might have gone farther and said that the spire was a Gothic sign of approval, as is the prominent Bible, showing that the man who is portrayed to resemble somewhat his poetic relative is a believing Bible Christian even though a member of the Established Church. 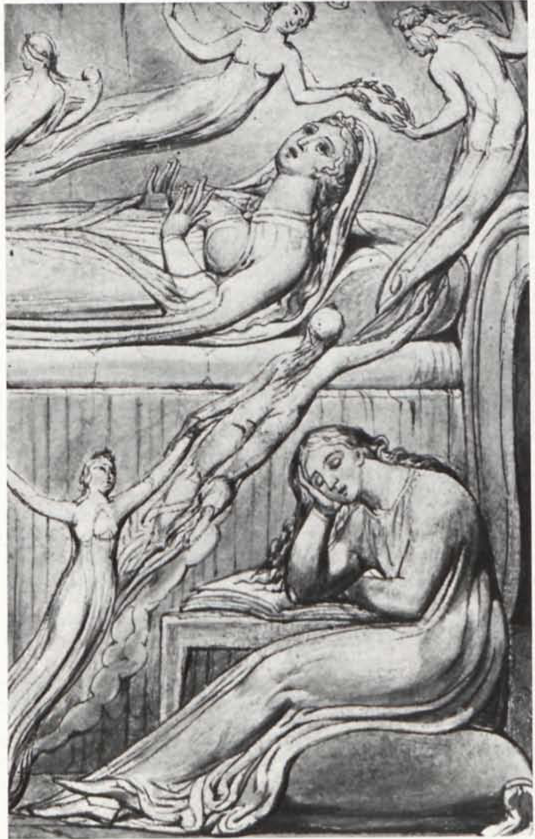 perhaps provide the clue as to how to use and appreciate this book. No Blakean will be satisfied by all of the interpretations; no Romantic scholar will find his conception of the period clarified or even precisely delimited in chronology. But both the scholar and the general reader—and also the collector—will find many surprises in the nooks and crannies of this book—matters he will want to pursue further. Unusual Romneys, lovely, fresh Calverts, Palmers rich in depth and meaning even without their color, an unusual Constable drawing, a Danniell that anticipates Henri Rousseau, a lovely Girtin, Shelley as an androgynous[e] figure, the “corrupt” Byron, the haunting juxtaposition of Fuseli’s and Rossetti’s Doppelgänger, the dialect poems of Barnes, the discussion of the Eidophusikon (a device that brought Romantic scenery and sublime Miltonic landscapes to gaping spectators), and the appendixes on minor artists and engravers and etchers who could bear important relations to Blake and other major Romantics—all these and many more unexpected encounters await the alert reader. I confess to being puzzled at first by the audience for which this book was intended. Who needs to have the entire text of the Tyger quoted or who needs to be told in a footnote when Titian’s name was first mentioned that he was “Tiziano Vecelli, called Titian . . . , Venetian painter.” I still regret the many loose definitions of Romantic, and the longueurs of seeing and reading what is already so well known. But these are obliterated by the rewards that may come from following Lister’s beckonings to possible discoveries of new pleasure and knowledge.

And now back to Clark for a final paragraph. He has brought us no nearer a theoretical understanding of Romanticism and Neoclassicism than has Lister, who weakens his definitions by exuberance of quotation and a loose manner of expression. Clark is the more sophisticated intellectually, but contradictions remain at the heart of his theory and he passes over significant variables. Classicism may indeed be intimately related to stress on drawing, but where does that leave Blake, who was a linear artist proud of his hard, wiry, bounding line? Classicism is related to totalitarian political order, but where does that leave David in the period of his early Roman fervor? Romantic art is sensual, yet one of the neoclassical David’s central qualities is his deep sensitiveness to femininity, called, confusingly, an eighteenth-century quality. The disciplined Ingres’s inspiration is the female body, for whom form could never obliterate the sensuous nature of beauty. Sometimes Clark’s sensitive and trained taste deserts him. Ingres’s “Napoleon” is surely uninspired pastiche-making and not a dazzling cameo, whose perfection of authority proclaims the deity of the Emperor; and the same artist’s “Jupiter and Thetis” is an overblown piece of visual rhetoric that is more laughable than majestic or beautiful, however delicate the hand of Thetis that chucks the solemn and ridiculous chief of the gods under his heavily bearded chin. And hasn’t Clark missed the majesty of Turner’s mountains in “The Goddess of Discord choosing the Apple of Contention in the Garden of Hesperidies” by insisting on the controlling classicism of the dwarfed foreground? And so one could go on with disagreements about taste and theory. But, still, the work, with its dazzling plates and bright comments, is impressive. Many feel that Clarke’s enviable vulgarisation is not all that haute. But the present writer finds The Romantic Rebellion, like Civilisation, a kind of masterpiece of intelligent and attractive popularization, the kind that must take place if the humanities are to thrive or even survive. What a brilliant stroke to put the iron girders of the Liverpool Street Station near the Carceri of Piranesi! And how bold—and unpopular—to call the draped figure of Balzac, so silly when a nude study, Rodin’s greatest work and display it for what it is, a mysterious and powerful mastery of massive and unyielding material. Clark will once more bring pleasure to thousands, whose horizons he will expand. And after the judicious have grieved and duly wrung their hands, we must all be grateful, for our own and others’ sake. 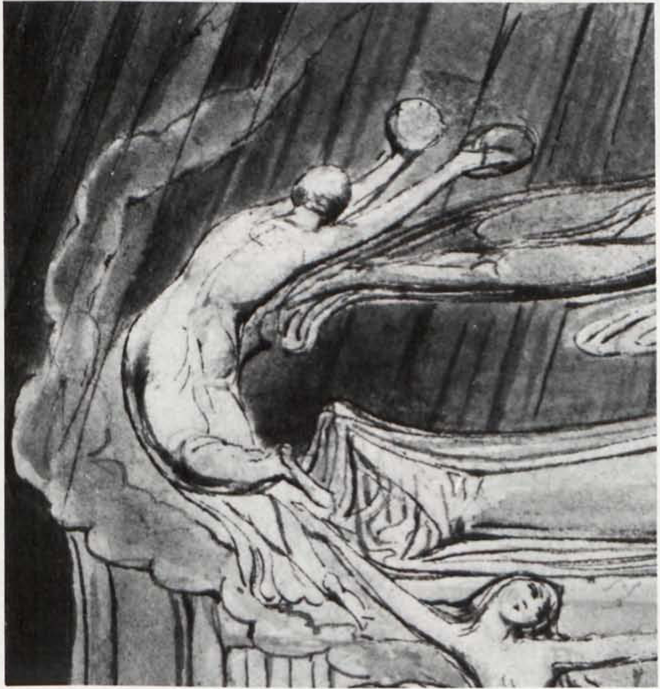